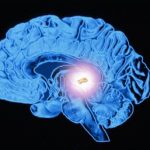 Your Pineal Gland, also known as your “Third Eye”, “Crown Chakra” or “Seat of the Soul”, is responsible for far more than you will ever guess.

The Pineal gland manufactures Melatonin from  Tryptophan, an amino acid which is the precursor to your Seratonin, the ‘feel good’ hormone.   It is also synthesised in the retina of the eyes as well as the gut.

People living in climates where there is insufficient sunlight, very often suffer from SAD.  Children with sleep disorders, blindness, Autism and central nervous disorders may also have low levels of Melatonin.

Lack of sleep will lower the immune system and affect the number of white blood cells which are your Natural Killer Cells that help fight viruses and tumours and they are most active at night when we sleep.

Melatonin is important in the prevention of hormonal dependant cancers such as breast cancer and our sexual development and reproductive health is also affected by the Pineal Gland.  Long days and excessive artificial bright lighting can lead to low Melatonin levels and an increase in sexual hormone production.   This can also have an impact with early onset of puberty in children.

If the levels of Melatonin are continually raised, this can suppress ovulation and sperm production and thus affect your fertility.

Melatonin is a powerful anti-oxidant and has protective properties regarding the cell membranes as well as boosting and modulating the immune system.

The Pineal gland acts as your magnetic compass, especially in the uterus,  which tells the spine which way is up.  If there is any disturbance during the development of the Pineal gland, this can result in Scoliosis or other spinal problems.  The Pineal is very sensitive to the earth’s magnetic fields and this is why we often suffer from jet lag when flying around the world.

Anxiety may often be a symptom caused by low Melatonin as the Pineal gland also contains GABA, and if there is a deficiency – this will lead to anxiety.  Breast milk contains high levels of Melatonin and has a calming effect on the baby.

Melatonin levels are at their highest when we are young, drop significantly at adolescence which triggers puberty and then continues dropping as we grow older so that by the age of 60, we only produce half as much as we did in our 20’s.

This results in the oxidative stress that causes ageing.

HOW TO IMPROVE MELATONIN LEVELS :

Exercising or walking outdoors in the early morning allowing absorption of sunlight through the eyes and skin will help restore correct levels.

Ensuring that there are no lights on at night when you are sleeping.

Increasing Tryptophan in the diet will also increase the synthesis of Melatonin and this can be obtained in Spirulina, Chlorella, walnuts, avocado pears, pineapples or supplementing with 5HTP under the guidance of a health practitioner.

NSAID’S such as Aspirin and Ibuprofen.

HOW TO SUPPORT THE PINEAL GLAND

Exercising in the morning;

CAN IRIDOLOGY IDENTIFY PROBLEMS IN THE PINEAL GLAND?

Here are two images which indicate signs at the Pineal gland:

Note the small dot or pigment around 12.00, close to the pupil.  This patient suffers from insomnia and anxiety. In this picture below, there is a small lacuna or diamond at the same position, along with a flattening of the pupil on the right hand side.  These signs are related to the Pineal gland and the spine and this patients suffers from insomnia and serious back problems. Never self medicate, always consult a Doctor or qualified Health Practitioner for advice and assistance as there may be underlying causes why Melatonin is not being synthesised or absorbed and it is not advisable to take 5HTP if you are on certain medications for example.